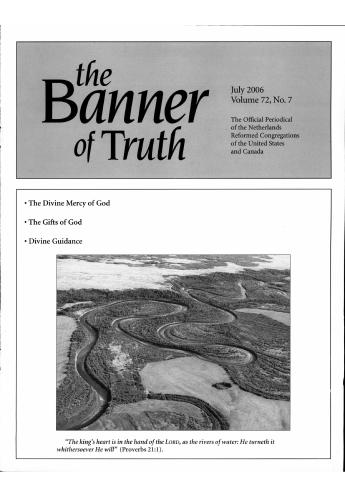 “But God, who is rich in mercy, for His great love wherewith He loved us, even when we were dead in sins, hath quickened us together with Christ (by grace are ye saved)” (Ephesians 2:4-5).

Right at the beginning Paul places his finger on a very moving and tender spot: “Even when we were dead in sins.” That is a reality about which many no longer want to hear. Many wish to step over that spot and move onward to Christ. But if that awful state of death has never become a reality in our lives, why would we need to be quickened with Christ? No, when Paul speaks about that wonder of God’s grace, he does not stand looking or expecting something from what is dead. But in the text he soars so high and points to the moving cause of divine mercy. He does not look to the world; that is one place where we cannot find the reason why there is mercy and love with God for such deeply fallen sinners. He does not look to all the people who belong to the congregation; there too we cannot find the reason why there is such an eternal wonder as being saved by grace.

Perhaps you ask what the moving cause is, that a holy and just God can have mercy. We find that cause with God Himself. From all eternity, when there was nothing that could move Him, He was there moved from within Himself. There a holy and just God looked upon deeply fallen sinners. There eternal election lies firm with God in Christ. That is why we may say with holy astonishment that the foundation upon which the Lord builds His church lies immovable with God in eternity.

Who are those who may be built upon this foundation? They are people who were cast out of Paradise, from God’s communion, and who lay under a just and everlasting wrath. The wonder of salvation is that God came to ask for them. Who are they? They are people dead in sins and trespasses, enemies of God and of His salvation. But the mercy of God sought for them, reached for them. Then they came upon their knees, and the Lord awakened the publican’s prayer in their hearts.

Oh, the great love wherewith He loved them! For those deeply wretched ones, mercy flowed from that love. Who can measure that love, a love for enemies who sought to cast Him from His throne? That is a love the church can never admire enough. In holy amazement the church stammers, “Why me, when there are so many for whom there is no mercy?”

In the text Paul points to this wonder of God’s grace. He speaks to God’s people. That wonder came to them when they were dead in sin. There they were changed from dead to alive in and through the only begotten Son of God, Jesus Christ.

Oh, what a wonder it is when light may shine upon that avenue opened in Christ. When by faith they may look upon it, they weep, “Lord, plant my feet upon that avenue.” Standing upon it, they hunger and thirst for something that must now be applied unto their hearts, the blood and righteousness of Jesus.

What wonderful dealings those are when, prepared by the Holy Spirit, that sinner may bow under the righteous demands of a holy God. There the Lord can do no wrong. If He must cast me away forever, then that is just and right. What a wonder it is when the holy Judge announces, “I have found a ransom,” when that holy Child says, “Father, I have paid for him.” There the Lord causes such a wretched one to understand, “By grace ye are saved.” When the Lord presses that wonder upon the heart, then within a song awakens, “Through Thee, through Thee alone, because of Thine eternal good pleasure.”

Now there is a homecoming unto the heart of the Father. And there are times when that sweetness, saved by grace, may lie so warm within their bosoms that they long for that homecoming. Being saved by grace becomes an ever greater wonder when step by step everything outside of Jesus may be dried up. An old child of God once said, “I had many saviors who could not, but now I have One who can. He will bring me all the way, and then a holy Father will say, ‘I see no spot or wrinkle in him.’”

Dear reader, examine your heart to see whether or not you are a stranger of God’s work within. What if you come to the end of life’s journey and you cannot say, “Saved by grace”? Then you will say, “Lost! Now it is forever lost!” Oh, beg the Lord for conversion. That is still possible because the Lord still saves by grace.

Not A Resting Ground, But A Pleading Ground

How often the child of God seeks to create a resting place in what the Lord has given. Then we try to find rest in this experience. But what a blessing when what the Lord gives may become a pleadin...

How wonderful the dealings of the Lord were in the life of Mephibosheth. Oh, when he thought of King David, how much fear lived in his heart. This all came to pass when the servants of the king cam...

Not a Resting Ground, but a Pleading Ground

How often the children of God seek to create a resting place in what the Lord has given! Then we try to find rest in such experiences. But what a blessing when that which the Lord gives may become...

For He Careth For You

The word “care” from the original language is translated to mean something that concerns the heart and fills the mind with serious thoughts. There are cares in daily life. We experience them within...

Uitgave: The Divine Mercy of God