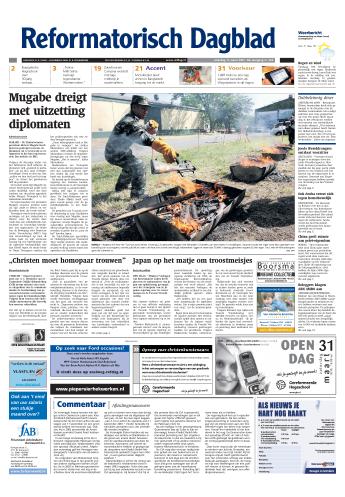 As I write a column for a Dutch newspaper for the first time, I have to ask myself: What does it mean to be Dutch? This is not a question that an Englishman can answer, I'm sure, but one that I need to ask.

When I was a boy, I would have given you a simple answer. To be Dutch meant to attend a large church with a fine organ; to go to a Christian school; to be in a large family; to wear a check shirt (if you were a boy) or a check skirt and neck-scarf (if you were a girl). You see, next door to the house where I grew up was a holiday cottage, advertised in the RD. Large families would come every summer, and many became good friends, returning regularly for several years.

Also, every summer my Dad would have a Dutch boy working on his farm. The first to come was from Staphorst. He wore clogs to work every day and when they wore out, he was disappointed to find that we did not have a local "klompenmaker". Another came from Capelle aan den IJssel and would never tire of telling us that it was the greatest place on earth. Another was the son of a "dominee", yet livelier and funnier than all the others together. Though each was different, all were devout, practical, hard-working, with strong principles and family values.

Since then, I have seen a different side of what it means to be Dutch. For example, when a doctoral research student, I drove around the coast of Spain with a fellow-student collecting plants as part of a botanical survey. One evening, we stopped at a campsite and hung up the plants we had collected during the day, so that they could dry. As often happened, several people came to ask us what we were doing - suspecting that we were collecting drugs. Not many of them believed our story and eventually a man came up and said quietly: "Don't worry; you can tell me the truth, I am Dutch!" For him, to be Dutch meant, at least in part, to have a liberal attitude towards soft drugs.

It is this aspect of being Dutch that seems best known abroad. If you say "Amsterdam" to the average Englishman, it is not tulips and "speculaas" that he thinks of first. Ask him to name a famous Dutch politician of the past and it will be Pim Fortuyn, not Abraham Kuyper. Ask a British lawyer what is important about Holland, and he will talk about euthanasia and assisted suicide. Over the past few decades, the western world has watched the Netherlands carry out a national experiment in the revision of moral values - and often followed her example.

So what does it mean to be Dutch? It's certainly not as simple as it seemed to me as a child. Then, I saw just one section of Dutch society; and as it had its own schools, its own businesses and its own political parties, it was easy for a child to miss the existence of the rest of the Netherlands. Now I can see two sides of what it means to be Dutch. But what exactly do these have in common, and what separates them? How do they relate to each other? I'm not sure but then again, I'm not sure what it means to be English either.

The author studied Biology at Cambridge University and Oxford University. He sits on the scientific panel of Truth in Science (www.truthinscience.org.uk), an organisation that is challenging the way origins are currently taught in UK schools.

In Mr. Japik's orchard there were many apple and pear trees. Each year they were loaded with fruit since he took good care of his fruit trees. However, every year he had a problem with boys who dam...

Nehemiah 8:8 I scarcely need to preface these remarks by saying that we must read the Scriptures. You know how necessary it is that we should be fed upon the truth...

TO A SOUL INQUIRING AFTER JESUS

My dear C.:—I do not and cannot forget you, and, though it is very late, I have to write you a few lines to say, follow on to know Jesus. I do not know if you can read my crooked writing, bu...

Rev. C. Vogelaar, Covell Avenue, Grand Rapids, MI What a wonder of God’s patience and mercy it was that Nineveh was spared after a general re...

Uitgave: To be Dutch